Part 1 of 10: Grand Canyon through the decades 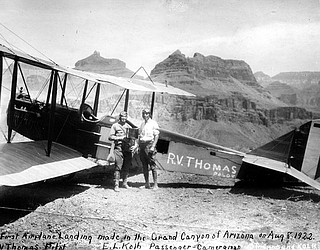 Woodrow Wilson signed the Grand Canyon National Park Act Feb. 26, 1919. In the decade following the establishment of one of America’s most iconic landmarks became a national park, daredevils flew below the rim, two adventuring lovebirds met a mysterious fate and Polly (Mead) Patraw became the first female ranger-naturalist at the Park.

Daredevil stunt pilot R.V. Thomas made the first landing in a standard bi-plane on Plateau Point, 3,000 feet below the rim.

For a payment of $100 (about $1,500 in today’s dollars), Thomas took off from the airstrip in Williams, Arizona, with Ellsworth Kolb in the cockpit filming. The National Park Service had cleared 500 feet of runway for the landing, but it almost wasn’t enough, as Thomas’ plane rolled to within about 10 feet of the edge of Plateau Point before coming to a stop and the two men safely disembarked. 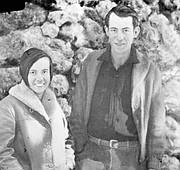 In October 1928, newlyweds Glen and Bessie Hyde set out from Green River, Utah, in a 20-foot wooden boat. Their destination: the Colorado River racing through Grand Canyon.

The last official sighting of the couple was Nov. 18, 1928 when they were seen boating below Hermit Rapid. A search party was formed when they were considered overdue at Needles, California Dec. 6.

On Dec. 19, an air crew spotted the couple’s boat adrift at River Mile 237. The boat was upright and intact with all supplies still strapped in. Bessie’s diary indicated the couple had cleared the rapid at River Mile 231. No traces of Glen or Bessie Hyde have ever been found.

Mead applied for a ranger-naturalist position with the U.S. Forest Service but was denied, as the USFS didn’t employ female rangers at the time. She then applied at Grand Canyon National Park and was accepted. She was sworn in Aug. 1, 1929.