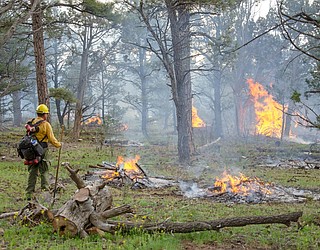 Crews will continue to mop up any areas along the fires perimeter that may threaten the holding line.

Because of changing conditions, fire managers have decided to halt any further ignitions.

Park officials say crews met the objectives for the prescribed fire, including improving the defensible space in the wildland/urban interface within the South Rim developed area and reducing fuel loads.