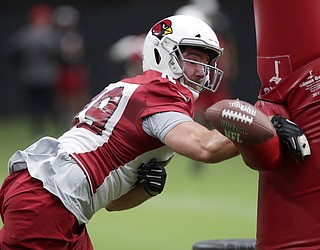 GLENDALE, Ariz. (AP) — Matt Longacre's stint in the desert was a short one.

The Arizona Cardinals released Longacre on Sunday, four days after signing the linebacker to a one-year contract.

The 27-year-old Longacre spent the past four seasons with the Los Angeles Rams, appearing in 38 games, including eight starts. He had 57 tackles, 6 1/2 sacks, a fumble recovery and a forced fumble.

Longacre had a career-high 5 1/2 sacks in 2017 and started a career-high seven games last season for the NFC champions. He played three postseason games with the Rams, including the Super Bowl.

The 6-foot-3, 265-pound Longacre was an undrafted rookie free agent out of North Missouri State in 2015.