Lady Phantoms call it a season after nail-biting tournament loss to St. David 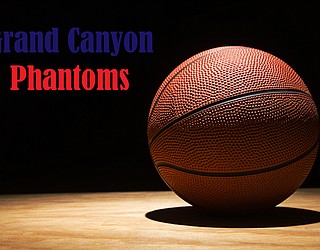 GRAND CANYON, Ariz. — After an exciting season that reached all the way to the west coast, the Lady Phantoms came up just inches short in their playoff game against the St. David Lady Tigers Feb. 15 in Prescott, Arizona.

The chips fell in the Lady Tigers favor by a single point, 60-59.

Both teams came out fast, moving the ball well, with neither taking a decisive lead in the first half. Junior Cayli Miles took the lead on offense, and the Lady Phantoms matched the Lady Tigers pace for the entire first half, going into the locker room tied 33-all at intermission.

Alana Keebahe and Miles hounded the Lady Tigers throughout the game – Miles swiping nine steals and Keebahe hauling in eight rebounds for the Phantoms. Savannah Longhoma struggled offensively, but gave the Phantoms a boost with six steals, four rebounds and three assists. In her last game in a Phantoms uniform, senior Makiah Kennedy had her best game of the season, lighting up for 10 points and three rebounds. Sophomore Calley Scheller came off the bench with three points and five crucial rebounds, while Maria Dugi dropped in three buckets, two of them from beyond the arc.

It was a bittersweet end to a high-rolling season, but the community has rallied around the team with pride this season.

“I’d like to take this opportunity to congratulate the team on a great season,” said head coach Rosie Evans.

“Although we didn’t accomplish our ultimate goal of wining a game at the state championships, this season gave us so many perspectives, experiences and maturity. We will continue to aim higher until we get that AIA golden ball trophy.”

Evans said she told the girls to embrace the defeat and use it as motivation to train harder and persevere for next year.

She echoes those same lessons to the girls for life itself.

“Be resilient in facing defeat, failure and disappointments,” she said. “Use these low points to get better, stronger and tougher.”

And while wins are great and championships are spectacular, she said, there is something much more unifying about the sport at its purest.

“We will continue to be optimistic that our journey has just begun.”

With a core of young players and even more in development (the team will lose just three seniors), head coach Rosie Evans expects to have a competitive team for the next few years.