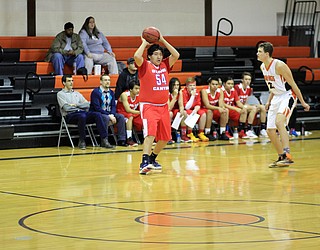 Elijah Dugi looks for an open player during a Feb. 6 game with Williams. (Wendy Howell/WGCN)

GRAND CANYON, Ariz. — Fully-rested from a first-round bye in the regional tournament, the Lady Phantoms rolled past the Williams Lady Vikings on the road Feb. 8, 55-49.

Sophomore Alana Keebahe established a dominant presence inside and took advantage throughout the game, leading the team with 19 points, nine rebounds, seven steals and a blocked shot. Cayli Miles added 15 points and a game-high 10 steals, followed by Savannah Longhoma with 11 points and seven rebounds. Betsey Sullivan and Makiah Kennedy scored 4 points each and Calley Scheller rounded out the scorers with 2 points.

Later that evening, the Lady Phantoms faced the Mogollon Mustangs for the regional tournament championship. The Lady Mustangs built an insurmountable lead in the first quarter, and although the Lady Phantoms outscored or held even for the remainder of the game, the damage was already done, and the Mustangs prevailed 70-52. 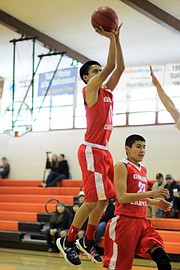 Aleryn Reid puts up a shot during the Phantom's post-season loss to Williams. (Wendy Howell/WGCN)

Phantoms bow out of tournament with loss to Williams

In one of their strongest games of the season, the Phantoms came up just short in their quest to advance in the regional tournament, losing to the Williams Vikings 67-61 on the road Feb. 8.

The Phantoms had a balanced scoring attack and sharp defense for the first half, matching pace with the Vikings and walking into the locker room down by only 2 points. The defense clamped down even harder in the third quarter, giving the Phantoms room to score while holding the Vikings to just 6 points, erasing the deficit and taking a 6 point lead.

Although the Phantoms put up a fight in the final period, the Vikings’ offense exploded, outscoring the Phantoms 28-16 to take the win.

In his final game as a Phantom, Aleryn Reid showed his familiar energy, leading all scorers with 24 points. Rufus Keebahe stepped up with 20 points of his own, going 5-of-6 from the free throw line and swiping four steals. Melakai Longhoma was back in action giving the Phantoms some much-needed height — along with dropping 9 points, he grabbed 8 rebounds and went 3-of-4 from the line. Cordell Bob scored 6 points and pulled in four rebounds, and senior Elijah Dugi grabbed four rebounds.

Head coach David Perkins said he was proud of the team.

“They demonstrated good sportsmanship consistently, they handled adversity with dignity and they worked diligently to get better at the game,” he said.

The game was the last in a Phantoms uniform for Reid, Dugi, Carlos Briones and Markeith Donley.